My First Equity Raise in Retrospect 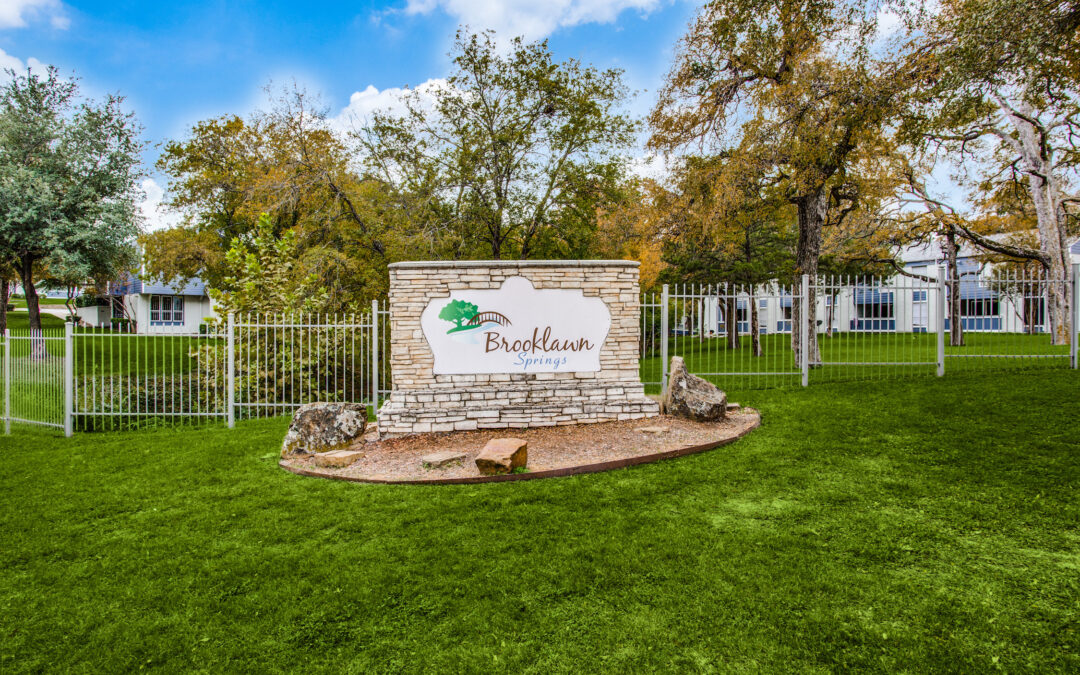 “Congratulations, you can now take possession of Brooklawn Apartments.”  There was no hiding the smile on my face.  My wife, Carolyn, saw it from another room and simply asked, “What?”  I breathed a sigh of relief and said, “It’s official.”

The texting between team members started immediately with virtual high fives, congratulatory emojis, and expressions of gratitude. The project is a good 1,600 miles away, but I felt a sense of closeness to it all, especially when I received a selfie from Reddy (one of the deal operators) from our new leasing office.

My father would be over shortly (to see his Grandchildren of course), and his timing could not have been better.  I took out the good scotch to celebrate with him.  He was, after all, my first investor.

So how did we get here?  How did a prosthetist from New York become a general partner on a $22.1 million apartment reposition?  Let’s look back.

Carolyn and I joined the Jake & Gino Community in early January as a way to connect with people of a similar mindset, grow our existing real estate portfolio, and build a business together.  Our game plan at first was to enter a new market in the Southeast, start building relationships, and ultimately joint venture on a 30-60 unit apartment complex.

“Everyone has a plan until they get punched in the mouth” – Mike Tyson.

We didn’t get punched in the mouth per se, but our plan changed when an opportunity presented itself in February 2019 during a lunch break at a real estate conference in Denver.  This is where I met Reddy and Jas (the other deal operator).  They spoke about a project they were about to have under contract in South Dallas and, I was telling them about two passive investments that I had in the same market.  We soon found out that one of my passive investments was directly across the street from their project.  Our conversations continued well after the conclusion of the conference and I learned more about their deal and the business plan driving it.  I was able to compare their deal to my passive investments and liked what I saw.  The question became whether they would consider bringing a first time equity raiser to their team.

On March 12, 2019, I verbally committed to raise one million dollars for Brooklawn Springs.  I felt really good about the deal, but more importantly, I felt really good about the team.  We all saw this as an opportunity to build a long-term relationship between ourselves and our investors.  The deal was weighted heavily to the passive investors, and rightfully so.  We took the long view and wanted to over deliver on the projections and build a solid foundation with our investors.

I’m not sure why I thought I could raise one million dollars.  Part of it had to do with some preliminary calculations I made based off expressions of interest, but I soon realized that I might have overcommitted. Not surprisingly, I was experiencing the stresses associated with capital raising.  I had two separate anxieties keeping me awake at night: the stress of missing my number and the fear of losing investor money.

Stresses aren’t always bad.  In this case, it pushed us to vet the deal further and quickly figure out how to raise money.  First, we needed to determine how to use a CRM (customer relationship management) and incorporate it into our website.  I also needed to build an investor list, a step that I should have taken a month earlier when Dylan, my mentor from Jake & Gino, recommended me to do so.  Carolyn took the lead on the CRM and I compiled a list of potential investors from our contacts.  We composed an email introducing the opportunity and invited people to reach out.  We were nervous sending out that first campaign and must have looked it over a hundred times to make sure there were no mistakes.  We argued as to who was going to hit the “send campaign” button.  Carolyn took one for the team.

Apparently, there are anti-spamming laws?  Apparently, we were potentially violating them?  Active Campaign wanted to see where our list came from and how the people on it opted in.  I tried to explain to them that everybody on the list is a known contact of ours.  Somebody that we know personally.  Apparently, that doesn’t matter.  I won’t dwell on the specifics here, but we ultimately achieved compliance.  Luckily, Jake & Gino has a rep in Active Campaign that was able to assist us in this.  Andriy, I thank you!  With our fear of sending the campaign replaced with the fear of sending it successfully, we hit “submit” again.  This time we got a better result.

“Your campaign was successfully sent.”

Relief was soon followed by one burning question: Why hasn’t anybody responded and committed to invest in this deal? I mean it had already been five minutes.  While that is a slight exaggeration, the fear of missing my mark got worse.  In the week between the initial offering email and our scheduled webinar, there were only two investors to make soft commitments for a total of $100,000.  There was a lot of work to be done.

I was both excited and nervous for the webinar.  My responsibilities would be introducing myself as one of the sponsors and then speaking about my experience in that submarket.  We had an extremely busy family schedule on the day of the webinar consisting of a science fair, ninja class, soccer practice, and more.  Four kids, two parents, and a last-minute change to my speaking points.  I would now be talking during the projections segment with very little time to prepare.  Parenting suffered here for the sake of the webinar.  I bribed three of the kids to behave from when the webinar started until Carolyn returned from the science fair (sorry dear).  The presentation went off without a hitch and I was proud of both my kid’s behavior and the webinar itself.

After the webinar, I had $320,000 in soft commitments and it was now reaffirmed that I would not likely reach my one million dollar mark.  Grant Cardone said, “Commit first, figure it out later.”  This holds partial truth for me.  I completely agree that one should jump in with both feet.  Had I not, then I would never have grown to where I did.  The part that sometimes gets overlooked is when other people are counting on you, and you’re “figuring it out.”  You have to be honest with those you are partnering with and communicate early and often.  Had I kept my fear of not being able to raise one million dollars to myself, I could have jeopardized the entire project.  I let Reddy know what was going on and I truly believe there was more gratitude for the timeliness and honesty of this information than there would have been had I hit one million dollars.  We were able to adjust and keep the project moving forward.

There was great relief not having that number hanging over me, but I knew there was still a lot of work ahead.  With a full-time job, wife, and four kids, finding time to raise capital was a challenge, but I was able to create time outside normal business hours for in-person meetings and phone calls.  At the end of the day, eleven people invested with us for a total of $520,000.  Amongst them were family, friends, colleagues, and investors I had met at various meetups.  One individual who invested was somebody I had prior lending relationship with.  He and his brother have a growing real estate business that they operate in a very altruistic manner.  I was private money on two of their deals.  In January they sent an end of year review to all of their business acquaintances, along with a gift.  It was a really nice gesture and cemented what I thought of them as people.  I sent an email stating as such and let them know I’d always be willing to work with them (people over the deal, every day of the week).  Low and behold, after I sent out my first email campaign, I received a call from one of the brothers who said he got the synopsis, told his wife about the email I sent in January and described me as “one of the good guys.”  He had some SDIRA (Self-Directed IRA) money and wanted to invest with me.  That investment alone made all of this worthwhile.  I truly believe it came from showing gratitude and saying “thank you.”  You never know what seemingly simple actions may yield.

The Brooklawn project itself ran into its own hurdles.  A couple of weeks before our close date, the lender came in with loan proceeds that were less than originally quoted.  We could have closed with the new terms but doing so would have negatively affected projected investor return.  I give the operators credit here.  Instead of closing for the sake of closing, they exercised a four week extension and found another lender who committed with proceeds and terms closer to the original quote.  It was more work for everyone involved, but better for the investors.  In the end, we had to raise an additional $600,000 the last month (truth be told there was time built into the operating agreement that allowed us to fund for an additional 180 days – but we didn’t want to use all of that).  I went back to my network and tried to raise what I could.  The operators decided that they were willing to offer another General Partnership spot to someone who could help with the remainder of the raise.  It was at this point that I went to the Jake & Gino community.  Not going there sooner is what I consider my biggest mistake of my journey here.  The support and selflessness I received was mind boggling.  The founders and leaders of this community put me in touch with their contacts and their investors in a way to help us cross the finish line.  There was nothing expected in return and seemingly no thought of losing an asset to another’s deal.  One of the people I was put in touch with, Tony, really came through and helped the project cross the finish line.  In my opinion, he is another “one of the good guys.”

In the three months preceding that celebratory Friday evening I grew immensely:  I operated outside my comfort zone, identified as an investor, taught people about an asset type they otherwise did not know, and grew my network exponentially.  I have many takeaways from this experience.  Most importantly, commit to something.  Don’t be afraid to hear no.  If you don’t have a mentor, find one.  If you do have a mentor, utilize him or her.  Use all the resources at your disposal.  Be honest and transparent.  Be someone you would want to work with yourself.  This is how I got here, but it’s not where the story ends.  Now starts the hard part.